The idea behind the development of Twitter was to create a platform to connect people and allow them to share their thoughts with a big audience. The developers knew the power of their model for sharing information and news but did not realize its ability to help with public safety. The public nature of Twitter, combined with its micro blogging format that encourages real time posting, is quickly becoming a crime fighting superhero.  Law enforcement has solved hundreds of crimes with the help of Twitter by reaching a wide audience quickly. This reach, which has been unavailable in the past, is producing valuable information to aid crime investigators. Information that could take weeks to gather by traditional investigative techniques, such as individual interviews, can literally take minutes through reading Twitter responses.  In addition to solving crimes that have already been committed, Twitter is being used to gain intelligence that helps predict future crime. Using artificial intelligence, Twitter posts can be searched at incredible speed to identify high risk situations and help prevent crimes from occurring before they happen (1).

Twitter started their service in 2006 and has had massive growth throughout the world over its 14-year history. Twitter is now the third largest social media site (350 million users) with what is widely considered the most active user base of any platform (2).

This high number of users, that now includes about 1 in 4 people in the United States, makes it likely that a user may witness a crime and post valuable information in real time. Retweets by “superusers” can spread this information at lightning speed which in many cases enhances response times to help victims and catch criminals. This wide net of users is also a valuable resource for gathering clues quickly. The video below is a good example of how Twitter is used routinely in police work to solve crimes.

Below is a survey I sent out to college students to see how many use Twitter and when they started using it. The results show that roughly 69% use Twitter daily and most of those users have started in the last 2 years. This high number is consistent with the Twitter data that suggests that younger people (under 49) make up 73% of its active users. Therefore, the active user percentage of the “younger population” in America is rapidly approaching 50% (3). Statistics show the younger population is more likely to post on social media and more likely to witness crimes, making the platform even more effective than gross statistical analysis may show.

One of the most famous crimes solved by Twitter was the beating of a gay couple in Philadelphia in 2014. A security camera caught a picture of a few unidentified people at the crime scene. That picture was sent around on Twitter and two of the suspects were linked to a picture at a restaurant just before the crime. A Twitter user that goes by @FanSince09 sent the restaurant picture out to a large group of followers to establish the name of the restaurant. He then kept solving until all the perpetrators were identified.  If not for the ability to send the picture out to thousands of local residents, it is highly likely that this crime would have never been solved.  Here is how it went down on Twitter (4). 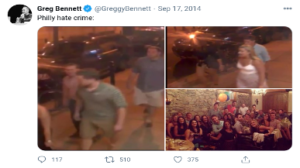 Interview with an actual Twitter user that reported a crime using the platform:

Because of the prevalence of Twitter in crime reporting, I thought it would be interesting to reach out to a broad friend group to see if they, or anyone they knew, had used Twitter to report a crime. It took less than 10 minutes for someone to respond. A friend of mine that now attends the University of Alabama, witnessed a brutal assault after a football game in Oxford Mississippi. He thinks it started as a rival fan argument which quickly escalated into a multiple person brawl. At the end, one of the participants in the fight smashed a bottle over the victim’s head and ran. My friend was able to get a picture of the perpetrator and send it out on twitter and another social media site.  He was told by a user that the police were using his information to try and help locate the man, but the case remains open as far as he knows.

Here is my interview:

Although not developed as a crime fighting tool, Twitter has become an invaluable source for law enforcement when investigating crimes. The power, reach, and speed of this platform continues to grow and so do its uses in stopping crime.  It was first used to investigate crimes after the fact. The platform is now being monitored in real time to quickly identify crimes in progress. But the future application may be the most interesting of all.  The ability to identify potential crimes and stop them before they occur is a public safety strategy that we have not had sufficient data to execute until now. Using artificial intelligence along with data from Twitter and other sources is very exciting for public safety in the near future.